I’m holding my hands up…I’m a sweary mum. I TRY my hardest to keep it clean whilst Charlotte is around but if some knobhead (oops) cuts me up in traffic I am likely to call him (or her) out on it at high volume and it comes out of my mouth before I remember to censor it for my 5 year old’s ears.
﻿

My attention was brought to my effusive language after catching Charlotte dropping some form of F bomb whilst walking away from me not once, but twice this week. My heart sank. I’m a failure as a mum.

“What a silly, naughty man” is sooo much less cathartic than “What a fucking dick” though, don’t you think?

I hardly ever remember my parents swearing when I was younger. We would get reprimanded if we said ‘crap’ which seems to be a pre-watershed word nowadays. Bugger was ok, just. Bother was preferred. When pushed during my teen years my mother may have uttered the f word but sort of muted herself when she said it. Much like when your nanna has to say ‘lesbian’.

I obviously did not inherit this restraint.

Nope, I’m the mum who swears and then wishes she hadn’t because she isn’t quite sure if the mum she’s talking to is a kindred spirit or one of those mum’s who suddenly look like you’ve hurt their delicate ears when you call someone a wanker.

I’ve also come to realise I’m the colleague who swears. Open plan offices are not ideal for this. My job makes me say ‘for fucks sake’ approximately 100 times a day so keeping that internalised would surely be bad for my health! Luckily my team mates are well aware of my colourful language but I’m sure not everyone approves.

I wish I was more mild mannered and I have tried, but it’s too hard to keep all the effing and jeffing in and filter it to a more child friendly/ work friendly chiding and so I’ve come to the conclusion that it’s not the end of the world.

Telling someone ‘I fucking love you’ makes it seem all the more true and heartfelt (sniff), telling someone they have acted like a dick helps you get your point across more strongly and if Charlotte needs to try these words out at home then it’s not the end of the world. I would be a pretty massive hypocrite if I said she couldn’t use those words wouldn’t I?!

It’s parents evening this week though so we’ll see if she’s been dropping them anywhere else as well. 😬

It does feel a little bit like the summer holidays over here even though Charlotte will still be going to nursery for four more weeks. We have fun things planned for our Friday’s off (Fun Friday’s if you will), we have all our weekends together booked up with people to see and places to go and a few days spare to still enjoy the sun which will hopefully decide to stick around a bit longer. (It is however raining as I write this!)

For our first Fun Friday of then summer we decided to go and see Disney Pixar’s Finding Dory movie.  It was released today so the cinema was busy but we went to the early showing so still had enough room to move (well I could have if Charlotte hadn’t insisted on sitting on my lap throughout). Click here for the link to the trailer.

I was was looking forward to a light, hilarious caper with a small amount of mild peril as per the previous film Finding Nemo, which I may or may not have owned before Charlotte was even a twinkle in the postmans eye (not really if my ex reads my blog!).  We’ve recently seen The Secret Life of Pets and before that Zootropolis which we both loved.

…oh how wrong I was though. For a U rating this had some really adult themes and I’m actually quite shocked.  I’ve always loved Disney/Pixar collaborations for the great mix of children’s humour with a smattering of ‘over the kids heads’ jokes for the poor parents having to watch yet another U or PG rated film, but this was severely lacking in the humour.  Yes, there was some funny seals for about four minutes. There was a crazy bird. An octopus gets splatted a couple of times but the rest just felt a bit angsty.

I won’t spoil the story for you in case you decide to see it but the vague gist is that Dory is on a quest to find her long lost parents. Cue flashbacks of cute baby Dory with parents, flashbacks of baby Dory trying to make friends but failing. Cue tears from me (although I cry at everything nowadays) and a very confused, emotional four year old.

I have to say I was quite disappointed with the film after waiting so long for the sequel to one of my most favourite kid’s films. So maybe save the £20 for another film or something else that won’t leave you having to console your child and secretly having to find the tissues too.  We went to our free art gallery after the film which Charlotte seemed much more enthralled about.

When I’m lamenting my ex and the time we were together lots of people say ‘but you wouldn’t be without Charlotte, would you?’ This is the phrase that has come to piss me off most since becoming a single parent and after catching up with another single mum it’s not just me it would seem. 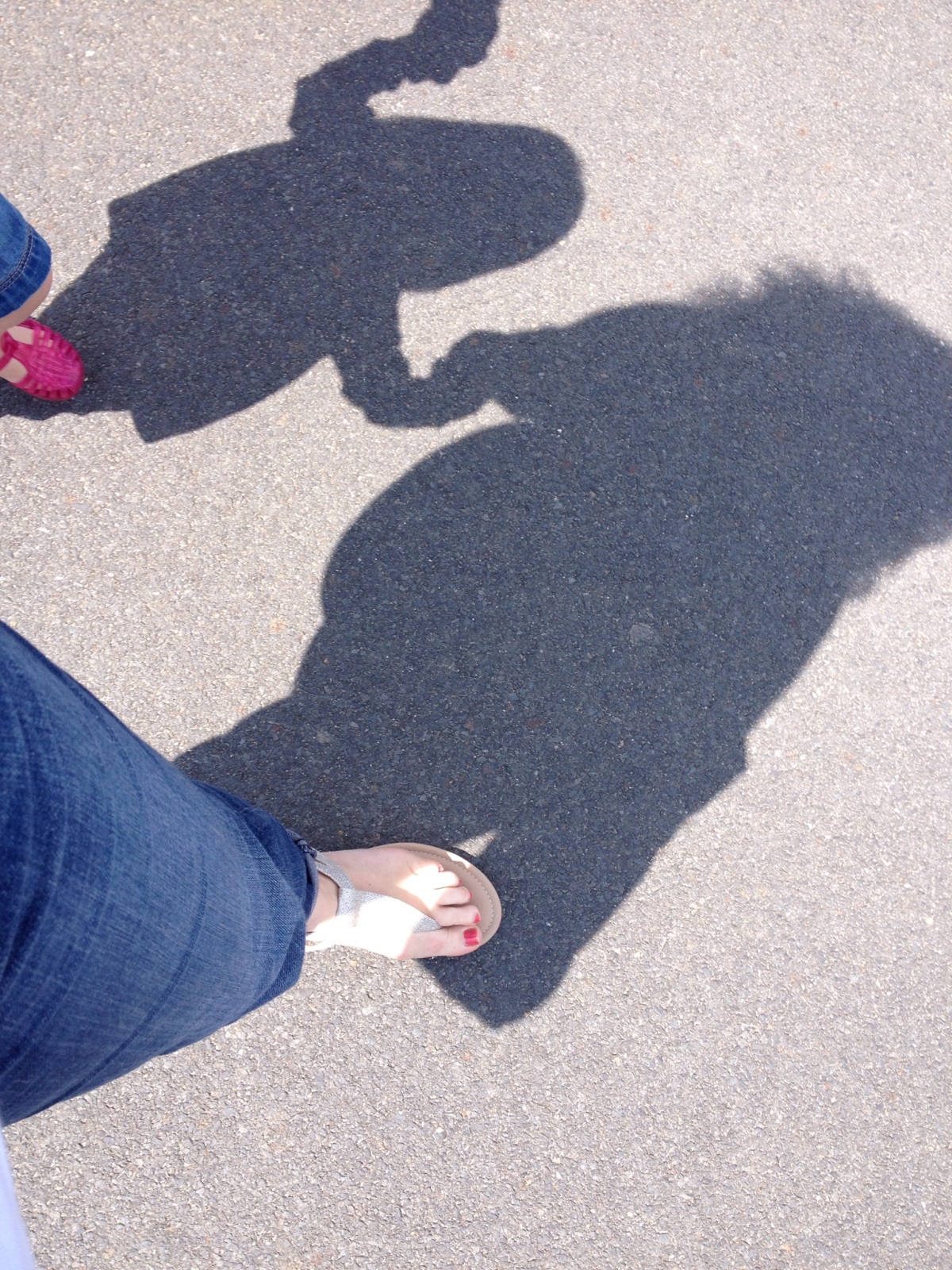 Hindsight is a wonderful thing but if I knew (which, truthfully, looking back, I probably should have had some inkling) that my ex and I would split when our baby was two, I’m not sure I would have chosen to have a child at that particular moment.

No, I don’t think the split has scarred her for life and I think she’s adjusted amazingly well to the life of a child from a broken home, but it saddens me greatly that the first two years of her life were filled with depression, tears, anger, frustration and guilt. Guilt being the only emotion I felt at her because I didn’t feel like I was being the best mother I could be, or the mother I wanted to be at that time and the person I expected to support me couldn’t or wouldn’t either. I just hope I’m now making up for lost time.

I always wanted children. When I was younger I never remember being excessively career focused because I wanted to be a mummy. Because of this, I know it’s probably my fault for pushing for a baby when my ex wasn’t ready (if he ever would have been). But in fairy tales once you get married you have a baby and I was living in a land of fiction thinking everything would be ok. If I’d stopped to look then I’d have realised we were not emotionally strong enough as a couple for it even before she came along.

So no, I don’t regret having my daughter because I get to watch her grow up and become an amazing girl and woman and some of my best memories with her probably wouldn’t have happened if things had been different. And no, I wouldn’t be without her. If somebody tried to take her away from me I’d unleash all hell but, would I choose to put a child, as well as myself through the past 18 pretty shitty months and all the time before the split? Would I choose to put a child through going back and forth from mummy’s to daddy’s house, having to hear conversations between mummy and daddy when they’re desperately trying to not shout at each other and having to listen to mummy cry because she just can’t hold it in anymore. Nope, I’m not sure I would.

It is in no way warm enough for this but if she's happy, I'm happy. 🍩 #coronavirusuk #lockdown2020 #spring #sunny #paddlingpool
Today I will mainly be rewarding myself with ALL these stickers. From a bf who isn't sleeping to a 8 year old who has to push back on everything I say I think I deserve a sticker or two!! Which sticker do you get today? #lockdown2020 #coronavirusuk #easterhols #rewardstickers #ididmybest
Really starting to take notice of the changes that happen on a daily basis all around us. These tulips which have been returning year after year are bursting out today when they were still tightly closed only a couple of days. If covid-19 teaches us anything, it'll definitely be about being more mindful and that's not the worst thing. #coronavirusuk #lockdown2020 #nature #tulips #frontgarden #spring2020 #herecomesthesun
I CBA with dressing up today I'm afraid and my fancy dress box is somewhat more limited than Charlottes so today she is Mal from Descendants. Not too bad considering we have found everything within the house! #lockdown2020 #coronavirusuk #homeschooling #fancydress #mal #descendants #disneyplus
Anyone else's dog just wishing you'd all f off and leave them alone? I'm getting that distinct vibe from Sophie this week. She's an old lady who's a bit poorly and I think she quite enjoys her time snoozing on our beds whilst we're out in the day. Now she's having to keep bailing out to avoid Charlotte's craziness and loudness and keeps thinking that if we're home it must mean food or walkies time! #lockdown2020 #coronavirusuk #whippetlife #whippetlover #whippets_of_insta #olddog
Had a busy day... Adult colouring in from @lovelayladesigns 💞
Thank goodness for my inability to walk past any reduced crafts after an event. Finally headed up to the loft to get down the Easter box and found these goodies hiding away. I'm hoping they keep Charlotte busy for at least half an hour or so so I can sneak off to the greenhouse with tea and biscuits in hand. Welcome to week 3 of lock down. 😴🔒 #lockdown2020 #coronavirusuk #easterhols #easterdecor #eastercrafts #eastercraftsfor kids #fiveminutespeace
Anniversary lock down dinner courtesy of @tascadali. Not exactly how I'd imagined celebrating FINALLY finding someone who wanted to be with me for an entire year, let alone move in with me and Charlotte after 8 months but if I had to be stuck inside with anyone it would be with him. #lockdown2020 #coronavirusuk #oneyearanniversary #awholeyear #anniversary #boyfriend
Thought I'd feel braver on my second essentials shop run but nope, I was still an anxious, worried mess. I honestly think the people wearing masks etc actually heightened my anxiety. Not because I don't think they shouldn't wear them just because it makes the escapade feel even more surreal than it already is. I don't have any PPE and don't even know how effective most of it is so I went on the basis of washing hands before, hand sanitiser during and after my trip and washing all my outer clothes once I'd returned as well as wiping down all the packaging from the food. Who knows if this is right or doing any good but we can all but try hey? What are you doing on your essential trips out? #coronavirusuk #lockdown2020 #weirdtimes #stayhome #staysafe